Entigrity websites use cookies to improve your online experience. They were placed on your computer when you launched this website. You can change your cookie settings through your browser.

From selling chocolates and candies on the streets of Accra, Ghana as a five year old to becoming an entrepreneur in the United States; the life of one of our clients, Jeff Badu, has been a success story in itself. Jeff Badu, CPA, is the owner of Badu Tax Services LLC which is a part of his multinational conglomerate Badu Enterprises LLC.

Jeff Badu is a parallel entrepreneur and a wealth multiplier. He’s a Licensed Certified Public Accountant (CPA) from the state of Illinois whose marquee company Badu Tax Services, LLC, is a CPA firm that specializes in tax preparation, tax planning, and tax representation for individuals and businesses. Another key company is Badu Investments, LLC, which is primarily a real estate investment company that acquires residential and commercial real estate properties in areas such as the South Side of Chicago in efforts to restore traditionally underserved areas.

At 27, Jeff is a millionaire, but the situation has not been the same since the beginning. He moved to the United States when he was eight years old. Attended Uplift Community High School in Uptown and was headed down the wrong path in his teens. In the want to belong to the local community and a badly yearned camaraderie, he joined a gang. He recalls,“I had been a bad kid who surrounded myself with the wrong things, and I had almost been put in handcuffs, and I knew that had to change.”

A major turning point in his life came during a summer visit to his native Ghana in 2008, it changed everything for him. Jeff saw how people were living in Ghana, how so many were homeless, including a few of his own family members. Further, a conversation with his aunt would reset his path and he realized he just couldn’t have a life like that. From then, Jeff started going to church, and his goal became to help an infinite amount of people who have a profound desire to do better in life. Some of his friends who weren’t lucky enough to have an uncle or aunt to redirect their lives have ended up dead or in prison.

“I knew it had to start with me. I had to change my lifestyle,” Jeff jetted back to the United States re-energized and with a fresh perspective, determined to be successful. “From then, I started going to church, and my goal became to help an infinite amount of people who have a profound desire to do better in life.“I had been a bad kid who surrounded myself with the wrong things, and I had almost been put in handcuffs, and I knew that had to change,” he adds.

After severing ties with the gang, Jeff paid particular attention to his education and that reflected in the improvement of his grades. He made everyone in his community proud of his achievement when he became the first student in the history of Uplift Community High School in Uptown, to enroll into the University of Illinois, Urbana, Champaigne.

Jeff started his first business plan as an 18-year-old during his freshman year at the University of Illinois, where he has bachelor’s and master’s degrees in accounting from the Gies College of Business. He formed a client base by volunteering to do taxes for family and friends while he went to school and built that base to 100 people by the time he was 24 years old working at PwC.


When he hit his 100th client, Jeff quit his full-time corporate job to officially start Badu Tax Services, LLC in September 2016. What sparked his interest in launching these companies is his passion for helping people minimize their tax liability and ultimately multiplying their money by investing it and building multi-generational wealth.

Jeff’s company serves 1,500 clients in all 50 states and in Canada, China, Russia, Liberia and India, and now he has 21 independent tax preparers working as contractors under his firm’s umbrella. His goal is to have 50 contractors and an office in the United Kingdom within the next 12 months. Jeff says,“I was born to be an entrepreneur and learned from my parents’ examples” he said. “It’s very hard to find a job in Ghana, and if you really want to start to make money, you have to be an entrepreneur.”

He became a millionaire in 2018, while he was just 25, and his mission in life is to have financial freedom to change lives in the philanthropic world. Apart from his profession and philanthropic passion, Jeff is fond of reading and writing poetry. His radio segments on financial topics can be heard on WGHC 98.3 FM in Chicago. He has also been conferred with Lester H. McKeever Jr. Emerging Leader in Advancing Diversity Award by Illinois CPA Society in 2018.

On Jan 6th, 2020 Jeff also released his book: 7 Figures - How to become a millionaire. His book is a short read that shares the millionaire principles and the journey I had to go through to get there. You can reach out to him at jeffbadu@gmail.com for a FREE digital copy of the book!

We feel privileged to have Jeff as our esteemed client who has achieved so much in so less time. Jeff has hired 2 full time Tax staff from Entigrity some time ago and speaks highly of them. The reason why Jeff hired Entigrity was because he found us meeting the three main criteria he had in mind to hire an offshore staff. Entigrity works exclusively with accounting firms, provided competent and good quality people who were experts in accounting and most important of all highly maintains data security. Very generously he speaks,” I was evaluating a few  companies as I was doing more research and Entigrity would definitely score just about a hundred on a scale of a hundred and the next best option would probably would score only twenty.” In a recent conversation with him, he went on to say that he would want to stay associated with Entigrity for the entire existence of his firm. Here is the video with the excerpts. 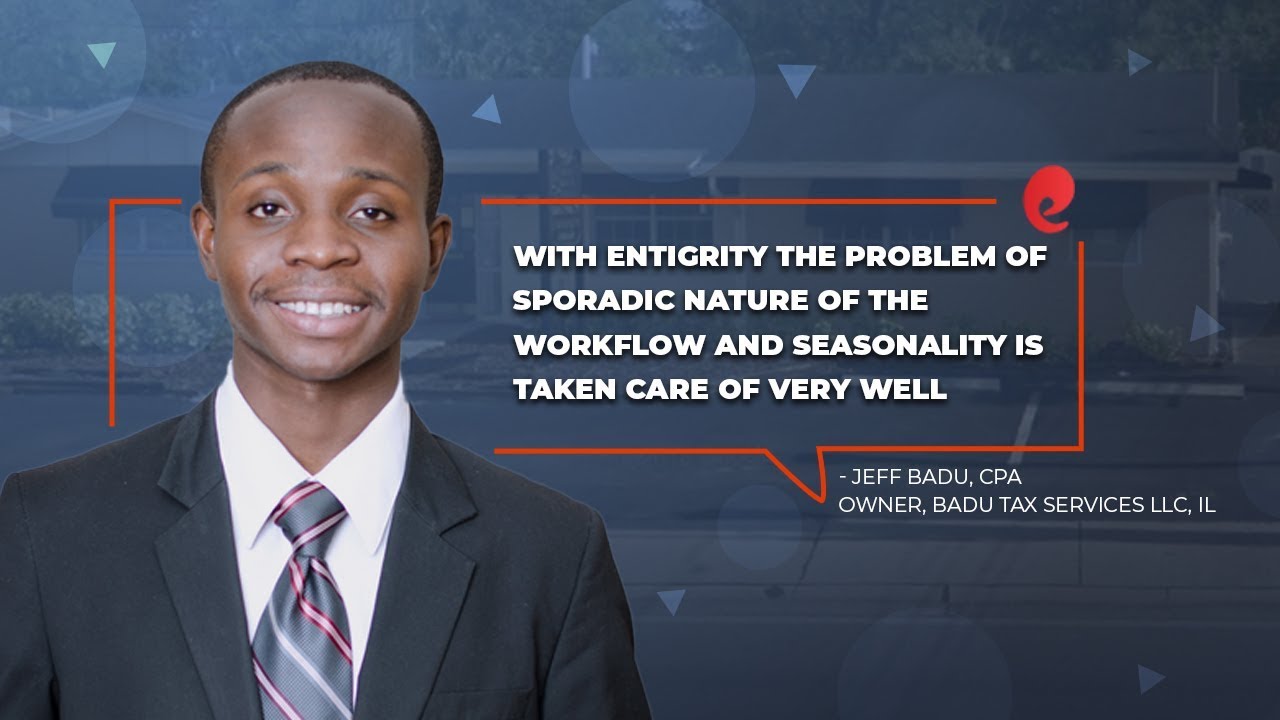 Entigrity™ is the trusted offshore staffing partner of 500+ accountants, CPAs and tax firms across the US and Canada. Our flexible and transparent hiring model gives helps firms of all sizes to hire staff for accounting, bookkeeping, tax preparation or any other task for 75% less cost. As a firm 'run by accountants, for the accountants', Entigrity captures the hiring needs of accounting firms most precisely, providing staff that works directly under your control and management, still you are left with least to worry about compliance, payroll taxes, overheads or any other benefits. Patrick joined team Entigrity in 2015. He has his core expertise in the field of technology but holds very special place for accounting. He has been rigorously doing efforts to find out ways how accounting firms can make the most out of modern information technology. Entigrity marks its presence with big boys at AICPA Engage 2017 Why trend of hiring Indian Chartered Accountants (CA) has become so popular these days in countries like United States, United Kingdom, Australia, Dubai What Our Clients Say

“Hiring Remote Staff through Entigrity was one positive change that we brought in our firm 2 years ago. Thanks to them for such a wonderful solution and fueling our firm’s growth. I could hire somebody at 75% less salary and need not worry about compliance, payroll taxes, benefits and dozens of other hassles were some evident and most appealing reasons for me. Great solution!” “We did our due diligence for their credibility but Entigrity has always worked with amazing transparency. We interviewed and tested various candidates ourselves and were able to find the right candidate. Today we have built a very robust and knowledgeable remote team. After working with Entigrity we have acquired two firms and our revenue has almost doubled in past 5 years”